“Excellent!”, “Immaculate!”, “Wonderful views!”, “We had to ask for more towels!”. These are just some of the comments made by lovers of folk music who have stayed in bed-and-breakfast accommodation in Paul Carbuncle’s native county of Kent. Now living in Nottingham, Paul has spent the last few years merrily gigging at pubs, festivals, and folk clubs on evenings which have been described enthusiastically as “Saturday” and “Wednesday” and sometimes “Friday”. Since the Midlands magazine Folk Monthly labelled him “bourgeoning”, back in the days before spell-check (2015), Paul has spent much of his spare time sitting next to the telephone ready for stardom to call. When the call finally arrived at tea-time yesterday, it came as a great joy to learn that he may have been mis-sold Payment Protection Insurance.

In a recent interview with a lady who said she was from off of the telly, Paul deftly cleared up once and for all any mystery surrounding his chosen musical genre. “Some call it folk-punk,” he explained, “while others call it punk-folk. Either is fine, but over-blend it and you’ll end up with funk or polk, and I’m sure none of us wants that. It’s rather like mixing the grape and the grain… you’ve got to be careful not to wind up with muesli.”

Although the foregoing blurb has been woundingly described as “unhelpful” and “unusable”, some people have nevertheless said the occasional nice thing about Carbuncular offerings. Doug Welch described the album A Cold Cup Of Tea And A Howl Of Despair as “very enjoyable” on his BBC Radio show Kent Folk, though he was chuckling a bit when he said it, and Bob Oram kindly gave the album a five-star review in the Morning Star. Steve Oliver, host of The Random Sessions, has described Monkfish Mix-Up At Farmers’ Market as “a delightful album from start to finish and if you don’t agree after listening I will see you outside in the car park”. You can judge for yourselves here on Bandcamp (and buy a beautiful t-shirt at the same time). Oh, and Roger Williams acclaimed “the estimable Paul Carbuncle’s formidable right hand” on his radio show A World Of Difference at an hour when young people might conceivably have been listening.

Back in The Time Before The Plague, Paul was one of the hosts of Carrington Triangle Folk Club, which met on Wednesday evenings upstairs at The Gladstone, 45 Loscoe Road, Nottingham, NG5 2AW. And roughly once a month he hosted The Sherwood Shessions at Bar71 Micropub, 71 Haydn Road, Nottingham, NG5 2LA, collecting donations to either BlindEye or Guru Nanak’s Mission, both Nottingham-based “soup-run” charities. Goodness knows when such cosy musical gatherings will resume. Ho hum, eh. 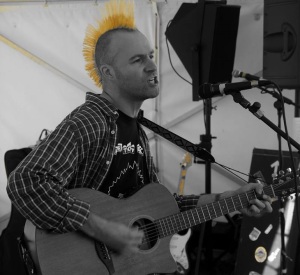 One thought on “About Paul Carbuncle”